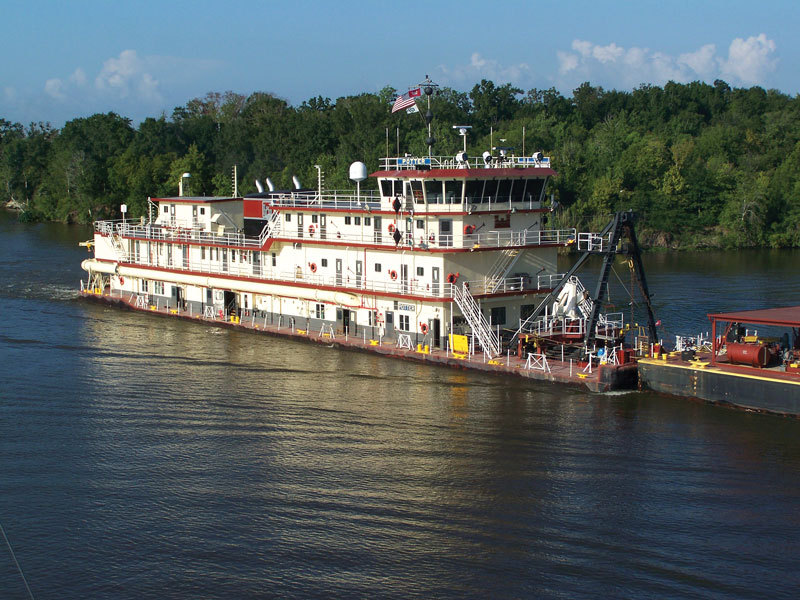 US Army Corps of Engineers Powers Floating Plants with Biodiesel

In 2009, an executive order was issued requiring federal agencies to reduce energy consumption, GHG emissions and fossil fuels, and increase renewable energy use. The USACE is using biodiesel to help comply.

On Oct. 5, 2009, Executive Order 13514 was issued by President Obama requiring federal agencies to develop a plan to reduce energy consumption, greenhouse gas emissions and fossil fuels, and increase use of renewable energy. One section of the U.S. Army Corps of Engineers is responsible for providing navigable waterways and carries out that mission with approximately 2,300 floating plant assets, including barges, tow boats, floating cranes, survey boats, patrol boats and dredges. USACE planned to meet the requirements of the executive order by reducing ultra-low sulfur diesel (ULSD) consumption and by increasing use of biodiesel on its floating plants.

Since the critical nature of the USACE’s mission could require immediate response with all equipment, it was decided that a trial evaluation program of biodiesel on a small scale should be carried out. The evaluation began with four vessels made available by USACE’s districts in Baltimore, St. Louis, San Francisco and Buffalo. They ranged in size from a 36-foot drift-collection vessel (BD-5) to a 98-foot debris-collection vessel (Raccoon). The other two vessels were a 75-foot towboat (Pathfinder) and a 52-foot tug (Mike Donlon). Next steps called for training the corps personnel on biodiesel use, assessing fuel delivery and engine components, and developing vessel-specific plans.

Staff training began with participation in a Federal Non-Tactical Vessel Biodiesel Initiative. The FNTV Working Group reviewed proven methods of the National Oceanographic and Atmospheric Administration’s Great Lakes Environmental Research Laboratory, which has successfully used B100 in its vessels since 2000. The working group identified nine areas to be watchful for when converting to B100: cold flow properties, material compatibility of hoses and gaskets, microbial growth, energy content, filter plugging, water separation, storage stability, OEM warranties, and cost. Additionally, three mechanical areas of the four vessels were targeted for pretrial assessments: injectors, valves (especially exhaust), and fuel delivery hoses and seals. Assessments identified the need to install four pad heaters below the external fuel tanks on the San Francisco vessel, replace fuel injectors on the towboat in St. Louis, and install new 10-micron filters on all four vessels and replace them more frequently.

Plans for evaluating B100 usage in field trials were developed and implemented. The performance tests consisted of “run tests” at constant power levels over select water courses, and “push tests” where the vessels pushed against fixed bulkheads. These tests were performed and monitored while the vessels were operating the engines on ULSD, and then repeated while operating on B100. Surprisingly, though fuel consumption differences varied with engine power, they showed that, in general, less B100 was consumed than ULSD at the same power settings. Monitoring of vessels during regular operations using B100 revealed easily correctable mechanical problems. In one vessel the fuel lines degraded; however, this did not reoccur after they were replaced with hoses rated for biodiesel use. Another vessel using B100 experienced fuel filter plugging immediately after being fueled and the reason was not found. After pumping out the fuel, the vessel used several tanks of ULSD and then resumed operations using B20, with no further problems.

The success in the initial field trials led to an expanded study of biodiesel fuel use in an increased number, and more diverse types of vessels, with improved monitoring of fuel consumption and emissions. The expanded study involved 14 corps vessels, different levels of monitoring, and different blends of biodiesel, ranging from B5 to B100. The basic level of evaluation consisted of using biodiesel during normal operations and surveying the crew regarding their opinions on its operational suitability (e.g., delivered power, engine condition, etc.). The crews of the vessels involved in the expanded study were favorably impressed with the reduction in soot and overall cleanliness that came with biodiesel fuel. One operator said, “It puts out less emissions and odor,” a plus for someone in the pilot house near the stacks. The maintenance personnel liked the cleaner appearance of the insides of the engines when using biodiesel and one mentioned a potential for reduced maintenance with B100. There were no maintenance issues associated with using biodiesel; however, all vessels took the precaution of increasing the frequency of replacing fuel filters when they switched to biodiesel. None of the vessel operators had issues related to engine power or efficiency, and no instances of adverse effects on routine vessel operations were reported. The fuel usage and costs were reported to be comparable to those for ULSD.

In addition to the field trials, a comprehensive testing project was carried out with two vessels equipped to measure engine power and fuel consumption, equipment installed by the Bristol Harbor Group, a naval architecture and marine engineering company located in Bristol, R.I. Additionally, emissions were measured by the University of California, Riverside’s Center for Environmental Research and Technology. The evaluation consisted of running “push tests” for three fuels: No. 2 diesel; B100 soy-based biodiesel and a second-generation/advanced biodiesel, namely a 50/50 blend of an algal-based biodiesel with No. 2 diesel. The algal-based biodiesel was produced by Solazyme for the U.S. Navy and was used in a number of successful field trials, but emissions data were lacking. Testing was conducted and emissions were measured following federal protocols. Compared with No. 2 diesel, B100 showed a 61 percent reduction in soot but the algal-based did not show a reduction. Detailed emission results will be available in a technical report.

In summary, the U.S. Army Corps of Engineers field trials demonstrated the feasibility of using biodiesel fuels by USACE floating plants to increase use of renewable energy and reduce the use of fossil fuels. From February 2011 to April 2014, the total volume of biodiesel consumed was about 3.1 million gallons. Relative proportions for the different blends were B5 at 1.34 million gallons, B10 at 178,000 gallons, B15 at 653,000 gallons, B20 at 848,000 gallons, and B100 at 43,000 gallons. All of the Corps Districts that participated in the expanded study intend to continue their respective use of biodiesel fuel.