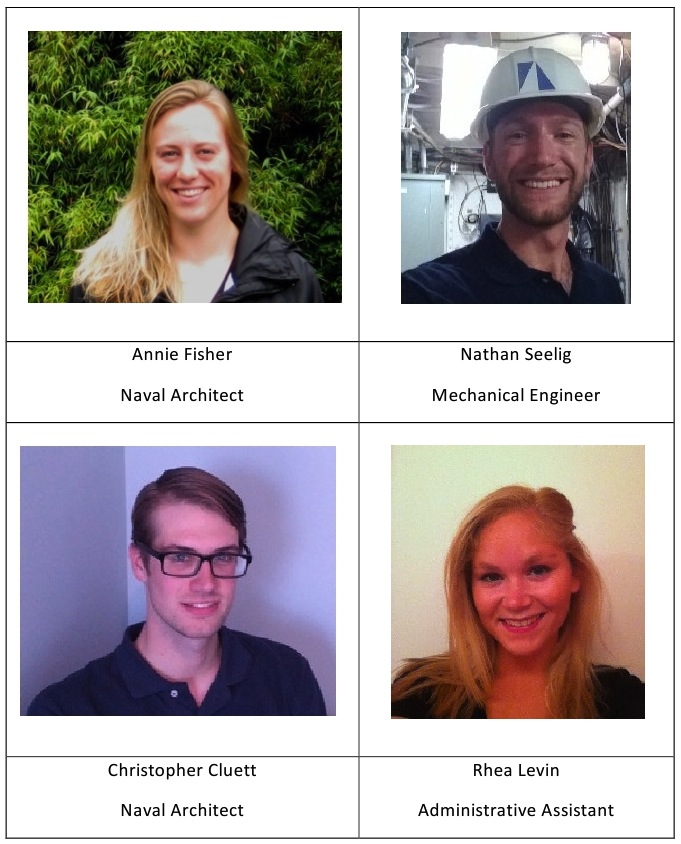 Annie Fisher graduated in 2013 from the University of Michigan with a B.S.E in Naval Architecture and Marine Engineering. She started at Michigan as an aerospace engineer, but switched to Naval Architecture after sailing as crew from San Diego to Honolulu on the Robert C. Seamans. Annie previously interned at Bath Iron Works and Hyundai Heavy Industries before becoming part of BHGI.

Nathan Seelig graduated in 2008 with an A.S. degree in Small Craft Design from Maine Maritime Academy. The program was a joint venture with MMA and The Landing School. Nathan then went to the University of Rhode Island to pursue his B.S. in Mechanical Engineering; from which he graduated in 2013. Nathan has worked as a small boat builder, interned with yacht designers, and has operated small craft using his USCG Masters license throughout his course work. Nathan currently is recognized as an Engineer-in-Training having passed The Fundamentals of Engineering exam in the Spring of 2013.

Christopher Cluett graduated from the University of Michigan with a B.S.E. in Naval Architecture and Marine Engineering in 2012. Prior to working at BHGI, Chris worked at General Dynamics Electric Boat as a Naval Architect. His primary tasks were concept design, shipyard support, and barge transportation of submarine modules. Christopher is the most recent addition to BHGI and is very happy to be on board.

Rhea Levin graduated from Roger Williams University in May 2013 with her degree in Media Communications. She worked as an office assistant for Focus Talent & Promotions prior to becoming the administrative assistant for BHGI. Rhea is very happy for this opportunity and is looking forward to her voyage with Bristol Harbor Group, Inc.

Bristol Harbor Group, Inc. is a full service naval architecture and marine engineering firm specializing in commercial vessel design and consulting. Over the past 20 years, BHGI has produced more than 50 unique designs, to which more than 100 vessels have been built. These include: barges, tugs, ATB’s, passenger vessels, dredges, and yachts.